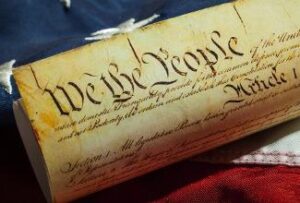 At 10:00 a.m. on Friday, September 17, 2021, a large group of judges, lawyers and community members met on the east steps of the United States District Courthouse in Wichita to celebrate the 234th anniversary our United States Constitution with a ceremonial reading in 110 parts.  The weather was warm and sunny and participants gathered under the shade near the courthouse steps as the Honorable Judge Eric F. Melgren kicked off the event by reciting the Preamble.  Judge Melgren’s reading was followed by recitals by U.S. District Judge John W. Broomes, U.S. Magistrate Judge Gwynne E. Birzer, Kansas Court of Appeals Judge Anthony J. Powell, Eighteenth Judicial District Judges Richard Macias and David Dahl and many others.  “Pocket” Constitutions and refreshments were made available to all participants.  The event concluded around 11:30 a.m. and all involved parties agreed they could not wait to return in 2022 to celebrate the Constitution’s 235th anniversary.